Many decades ago in Adelaide when I was much younger and a student I used to march in National Aboriginal Day Observance Committee marches. They were shorthanded to NADOC marches, back in the days when Islanders hadn’t yet been included and there was no ‘I’ in the name. They later became better known as NAIDOC marches. 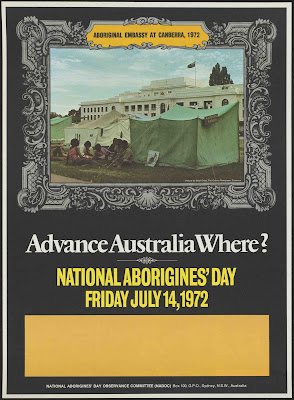 I realised a while back that I must have been marching under the new Aboriginal flag at its birth because it was designed in Adelaide in those years and would have been first carried in local marches there. I had a poster from those years which I used to cart around with me until one day late in 2004 when I was about to move yet again. I  decided to donate it to the National Library of Australia. As a memento I kept a poor quality photo of the poster.