When we start to think about the economy of the future - and the clean and clever jobs that make it up - we encounter a confusing array of ideas and terms. Innovation, the knowledge economy, the creative economy, creative industries and the cultural economy are all used, often interchangeably. Over the years my own thinking about them has changed and I thought it would be useful to try to clarify how they are all related. 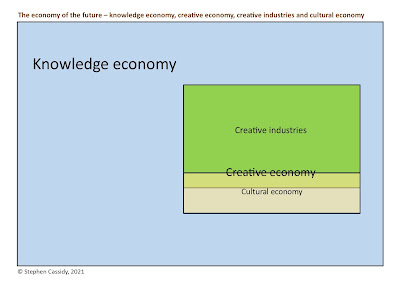 Where the cultural economy (and to a lesser degree, creative industries) differ completely from other knowledge economy sectors is that, because they are based on content, they draw on, intersect with and contribute to Australia’s national and local culture and are a central part of projecting Australia’s story to ourselves and to the world ­– they help channel those who write the stories, paint the pictures and dance the dances that tell our story. In that sense they have a strategic importance that other sectors of the knowledge economy do not. As part of Australia's culture sector and the cultural economy that derives from it, they share the critical function of managing the meaning of Australia and what being Australian means, which distinguishes this sector from other parts of the knowledge economy.

The work I did on creative industries, including while I was in the Research, Statistics and Technology Branch of the Department of Communications, established the parameters of my subsequent interest. Even though I went on to manage various aspects of the Indigenous cultural programs of the Commonwealth for almost six and a half years, I have always seen my primary area of interest as being creative industries (and their links to the cultural economy) and even my continuing interest in First Nations culture and languages has largely been from this perspective.
Read more »
at 3:35 PM No comments:

Broader and deeper - the creativity and culture of everyday life

Increasingly I realise that everything is connected – if only we are able to recognise how and benefit accordingly. The ripple effects of creativity and culture reach far further than we might expect.

At one point one of my managers in the public service commented with a note of disapproval that I seemed to have done lots of different jobs in my career. What she didn’t realise was that I had done the same job, but in lots of different places. I was surprised that she didn’t see that because one of the things I loved most about my time in the Commonwealth public service was that every couple of years – if not months – you would find yourself doing something new. 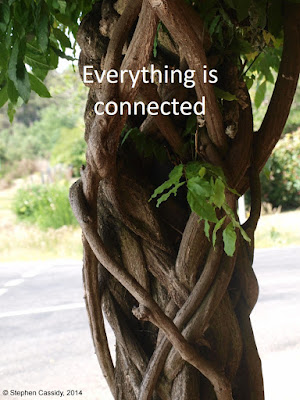 You would never hear about this, but at the height of the pandemic, one of my former Arts colleagues found herself working around the clock in a task force set up to liaise with the major supermarkets to ensure that supplies didn’t run out, as a major attack of moronavirus stripped the shelves of toilet paper.

Beyond boundaries – Dr Terry Cutler and how to connect everything

The global pandemic has so upended the world we knew that everyday matters, like relationships, birthdays, births and deaths have often slipped by unnoticed and uncelebrated. In a world of pandemic and lockdowns – and shakedowns by government – such things seem to go unnoticed. In such a way the departures – through retirement or death – of those who have made unparalleled contributions to our future have often passed before we even notice. This was certainly the case with strategic creative and cultural thinker, Dr Terry Cutler, who died during the pandemic lockdown last year, when the focus of most of the world was on other things.

I was listening to a talk about innovation by Professor Stuart Cunningham at the University of Canberra when I was shocked to hear that Dr Terry Cutler had died last year. In a world of pandemic and lockdowns – and shakedowns by government – such things seem to go unnoticed. Terry Cutler did so many things, across so many areas, that it’s difficult to even skim across them all – strategist at Telecom Australia in the early days of the digital revolution, key figure on the board of the respected science and technology body, the CSIRO, President of the Australian Centre for the Moving Image, to name just a few of his many roles.

Too soon to tell
What I want to touch on is only a part of this, in a period when I worked with him. It is only part, but it is extremely important. I regularly come back to much of it in my blog articles about innovation, cultural institutions, content and the digital universe. It has informed ‘Impact and Enterprise’, the post-graduate Unit I developed at the University of Canberra. This focuses on the interrelationship of the broader economic and social impacts of creativity and culture, arising from the way creativity and culture is a central part of everyday life and the activities that make it up.

‘When asked what he saw as the long term effects of the French Revolution, [he replied] that it was too soon to tell.’