Back in 2013, when the first of the latest string of Coalition Governments we have had was elected, there seemed to be a strong view within the Coalition that broadband was a luxury, mainly useful for entertainment. Yet those of us familiar with the work of Australian post-production companies, doing the finishing work on major US films during the day while the US industry slept, and sending it by broadband overnight for work to resume in the Northern hemisphere the next day, knew it was a key part of Australia’s productive infrastructure. Then the COVID-19 pandemic confirmed it. Now the Government has acknowledged that there are major deficiencies with the National Broadband Network but is it too late to save it and make it the national asset we need and deserve?

I don’t normally write about technical issues. However high quality broadband is so crucial to the future of the creative sector that commenting about it is unavoidable. After spending ten years belittling the Labor Government plan for almost universal high speed broadband, the Coalition Government has finally accepted that what it has produced is a second-rate mess. 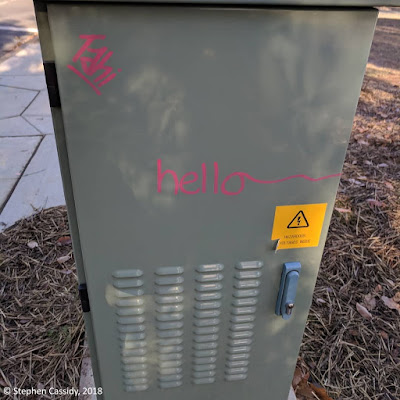 Distinctive National Broadband Boxes have sprung up across the nation - but the news is not as welcoming as the message on this one.

Now, seven years after the Coalition Government was first elected, it is pushing ahead with plans to spend $4.5 billion to fix up the compromise its own cuts have created. The Minister now responsible, Paul Fletcher, used to work for Optus, so on top of the advice from his department, he must have a pretty good historical idea of the problems. It’s a good sign that he has finally made this announcement, despite the limitations of Government commitment. There’s also the question of who would want to go into the next election with this disappointing issue on your hands?

Key part of our productive infrastructure
In 2013, the Coalition Government tore up Labor’s 2008 plan for a network of 93 per cent FTTP (Fibre to the Premises) by 2021 at an estimated cost of $43 billion in favour of a second-rate mix of different types of connections of varying quality. The decision to use copper-based FTTN (Fibre to the Node) connections across much of the network was particularly controversial, with telco experts warning that technology was no longer fit for purpose in 2020. Many of these connections are so poor that telcos, including Telstra, have stopped offering high-speed NBN plans to FTTN customers.

‘What we have lost out of all of this is seven years of much higher productivity, something that could have helped transform Australia and its economy, which had already been struggling with poor productivity long before the pandemic. Now we will be jogging to catch up, with the extra load from the pandemic fallout to add to the burden.’

At the time there seemed to be a strong view within the Coalition that broadband was a luxury, mainly useful for entertainment. Yet those of us familiar with the work of Australian post-production companies, doing the finishing work on major US films during the day while the US industry slept, and sending it by broadband overnight for work to resume in the Northern hemisphere the next day, knew it was a key part of Australia’s productive infrastructure. The use of broadband during the COVID-19 pandemic has demonstrated that high quality broadband is a central part of our essential infrastructure, like electricity and water and food distribution networks.

Jogging to catch up
Unfortunately, late as it is, this turnaround is not nearly as good as it looks. It seems that NBN Co’s own plans show that only 400,000 connections are expected to be upgraded by 2025. On top of this, it looks like those seeking access to this higher quality network will be required to sign up to NBN plans that are unaffordable for many households. Perhaps we could say ‘better late than never’, but much more welcome would be ‘better better – and sooner’. What we have lost out of all of this is seven years of much higher productivity, something that could have helped transform Australia and its economy, which had already been struggling with poor productivity long before the pandemic. Now we will be jogging to catch up, with the extra load from the pandemic fallout to add to the burden.

I suppose it’s hard to expect much from any kind of telecommunications policy when we’re spending increasing amounts of time at home hanging on the telephone answering scam calls. If anything sums up our current politically bankrupt times, it is the way our politicians of all shades have seemingly happily abandoned our phone lines to scammers. There has always been a reluctance to keep cheap local calls, with telcos pushing for years to move to more expensive timed calls. Maybe they no longer need to worry. If you have a landline, something becoming increasingly rare, ninety per cent of calls are outright scams. I don’t know what this means for vulnerable elderly people, who are most likely to have a landline. Maybe our politicians think scamming phone calls are part of the new normal, summed up by a possible revised saying for our times, ‘It’s broke, don’t fix it’.

Beyond a joke – surviving troubled times
‘We live in troubled times – but then can anyone ever say that they lived in times that weren’t troubled? For most of my life Australia has suffered mediocre politicians and politics – with the odd brief exceptions – and it seems our current times are no different. Australia has never really managed to realise its potential. As a nation it seems to be two different countries going in opposite directions – one into the future and the other into the past. It looks as though we’ll be mired in this latest stretch of mediocrity for some time and the only consolation will be creativity, gardening and humour’, Beyond a joke – surviving troubled times.

Remaking the world we know – for better or worse
‘Given the Government cannot avoid spending enormous sums of money if it is to be in any way capable and competent, this is an unparalleled opportunity to remake Australia for the future. Usually opportunities such as this only arise in rebuilding a country and an economy after a world war. It is a perfect moment to create the sort of clean, clever and creative economy that will take us forward in the global world for the next hundred years. Unfortunately a failure of imagination and a lack of innovative ambition will probably ensure this doesn’t happen any time soon’, Remaking the world we know – for better or worse.

Creativity at work – economic engine for our cities
‘It is becoming abundantly clear that in our contemporary world two critical things will help shape the way we make a living – and our economy overall. The first is the central role of cities in generating wealth. The second is the knowledge economy of the future and, more particularly, the creative industries that sit at its heart. In Sydney, Australia’s largest city, both of these come together in a scattering of evolving creative clusters – concentrations of creative individuals and small businesses, clumped together in geographic proximity. This development is part of a national and world-wide trend which has profound implications’, Creativity at work – economic engine for our cities.